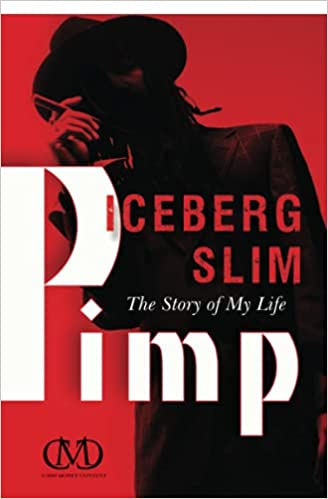 Robert Beck a.k.a Iceberg Slim lived a fast life as a pimp in the American Midwest during the ’30s and ’40s. The memoir is a brutal and honest recount of a man who had the intelligence (stated to have a high IQ) to live a “square” life, but as a young black man in White America during segregation, all his options were stifled and he found his way to success even if it was an unflattering one to the rest of America. Furthermore, the way Iceberg narrates his life is explicit, introspective, poetic, and intense especially when he describes his relationship with his whores and the cruel ways he disciplined the ones who were obstinate. In addition, the street slang used in the narrative and dialogue adds an element that encapsulates the reader and with that, it makes the setting and time extremely vivid. Granted a majority of the vernacular is antiquated, but its constant usage by Iceberg and the supporting characters is something I enjoyed learning. Words such as “Jip” (Mouth), “Slat” (Money or a time spent in prison), “Jasper” (Lesbian), “Murphy” (A con played on suckers looking for whores) and more were interesting to learn and is something a lot of readers will not be familiar with, so a glossary is provided at the end of the book. However, I didn’t use it and still understood a majority of the slang. The ones I didn’t understand I researched. With that said, the narration reminded me of Noir detective novels I’ve read in the past, a look into the criminal underworld where the protagonist was a criminal. Anyway, before I start the summary of Iceberg’s life, I want to say that I believe a book like this one couldn’t be published today because of the political climate we live in such as “Cancel Culture” and political correctness. For one, a lot of readers will find the way Iceberg Slim conducted himself as a pimp and con man as meticulous when he set his mind to a goal and knew the strategies for a successful outcome. On the other hand, he applied stringent stipulations his stable (a pimp’s group of whores) had to adhere to, which sometimes had violence accompanying if disobeyed. In regard to this, he prefaced the book by explaining that what you’ll be reading is a raw story that is filled with violence, drugs, sex, and a plethora of misogynistic language, it isn’t to be glorified or revered. I found this book to be a profound reading experience for its intriguing themes such as; Street life in the ’30s and ’40s, Racism, Power dynamics in business relationships, Recidivism, and more.

“A pimp has gotta know his whores, but not let them know him; he’s gotta be god all the way.”- Sweet Jones, “Pimp: The Story of My Life”

The quote above is from an older pimp who gave Iceberg a rundown (a breakdown of how things are) on how he was supposed to be an almighty force to his stable. He couldn’t let his whores see him falter or lose his composure. His calm temperament was how he earned his nickname Iceberg but I’ll get to that later, but first, l want to start with Iceberg Slim’s (Robert Beck) background. Born in Chicago on August 4th, 1918, Robert Lee Maupin later Robert Beck spent most of his childhood in Milwaukee and Rockford Illinois before returning to Chicago. At the age of three, his caretaker molested him, and the way he describes what she did to him in the book is revolting. From that experience, his mind was skewed when it involved sexual matters. His mother was abandoned by his deadbeat father who tried to reconcile with Iceberg when he was at the pinnacle of his pimping days. However, Robert disregarded his advances to make amends. Iceberg still had a father figure in his life when a man named Henry Upshaw began a relationship with his mother. Robert had a lot of respect and love for Henry. Unfortunately, the relationship ended badly as Robert’s mother betrayed Henry and callously left him for a con man named Steve who would constantly beat her, and killed Robert’s cat in front of him. It was then that Robert knew he never wanted to be in a position like Henry. He planned to assert dominance in his future relationships by any means necessary.

Moreover, Robert was an intelligent young man enrolling in Tuskegee University and helping his mother with her salon business. Pimps were frequent patrons at her salon. Even though his mom had high hopes for him, the street life was enticing to Robert when he saw the pimp game happening outside those salon doors. He learned to con during his teenage years with a street hustler and con man named Party Time and it wasn’t too long after his criminal acts with Party Time that he was expelled from Tuskegee for bootlegging and went to pursue the pimp game. I don’t want to get into the intricacies of pimping, but I will briefly explain how Iceberg handled his stable and conducted himself after he met Sweet Jones and his friend and fellow pimp Glass Top. Furthermore, both these men had a major influence not only on his introduction to become a pimp but whenever he had a dilemma and needed a rundown on how to find a solution to his growing stable or as he referred to his whores as his “family”. For example, Iceberg had a whore he called “Runt” and she put in significant work for him in the streets, turning tricks (a prostitute’s customer) heads left and right, and would bring Slim the exact scratch (money) he expected. Being a high earner for Iceberg she began to become hubris and defiant toward Iceberg and what he demanded from her. So, what Iceberg did was psychologically break her down with verbal threats since he knew the life background of his whores, but it didn’t do much. She would go on and threaten to leave him and find another pimp to work for, which was one thing a pimp didn’t want to hear. From there, Iceberg needed to establish control over his whore and he went to “upper management” on how he should get her to be compliant and not leave. He would confide in the older pimp Sweet Jones. Sweet Jones would tell him to not worry about it because what he would explain to Iceberg would work and keep the Bitch in line. The method of discipline he would bestow to Iceberg was to beat that Bitch with a coat hanger. I know this sounds extreme, but after the act, Iceberg would alleviate her pain by giving her pills and running her bath. She would be grateful for what he did and relaxed that she would forget he was the asshole that beat her. Now that’s some cold shit.

In addition, he would con one of his whores near the end of the book as she was threatening to leave his stable and influence other whores to do the same. You would have to read the book to understand the elaborate way he not only kept his whore in line but had leverage over her on something she couldn’t live down. Equally important, in the book Iceberg broke down what a bottom bitch was, and if you’re unaware of the concept I’ll explain. A bottom bitch is a pimp’s main whore and his foundation. She would manage the egos and competitiveness of the other whores in his stable. Additionally, Iceberg was said to have over 400 whores, and many bitches came and went, some got snatched up by other pimps when he was locked up and got pregnant by them, and some flamed out due to exhaustion opening it up for many tricks. Before I forget, I want to mention how he got his nickname Iceberg. Iceberg Slim was a heavy drug user during his pimping days, from Cocaine to Heroin, to the combination of the two called a speedball, and he would also smoke weed. In regard to this, Iceberg was turned out (introduced to the first life of drugs) by a prostitute named Pepper in his rookie pimping days. She would engage in kinky sex with a young Iceberg and got him hooked on hard drugs, specifically cocaine. Anyway, I digress. One night he was high off cocaine at a bar and a shootout happened. Standing still as the bullet went through his lid (Hat), he finished his drink as if nothing had happened. He left the bar relaxed, and not fazed by the spectacle. His friend Glass Top, astonished by his cool demeanor called him Iceberg because the way he acted was so chill in the face of danger, and from then the moniker stuck with him.

All in all, this was a riveting read. Iceberg had an influence on hip-hop artists and pimps that followed him and used him as a reference to their pimp game. In addition, he lived a life where he was ruthless, scrupulous in the pimp game, and aware that he had to be in power not only with his stable of whores, but within himself when in the face of adversity. He could have achieved his mother’s wishes of having a credible profession like a lawyer or doctor, but he found the pimp game and street life that made him who he was and he capitalized off it. I’d say after reading this that street life is foul, never fair.