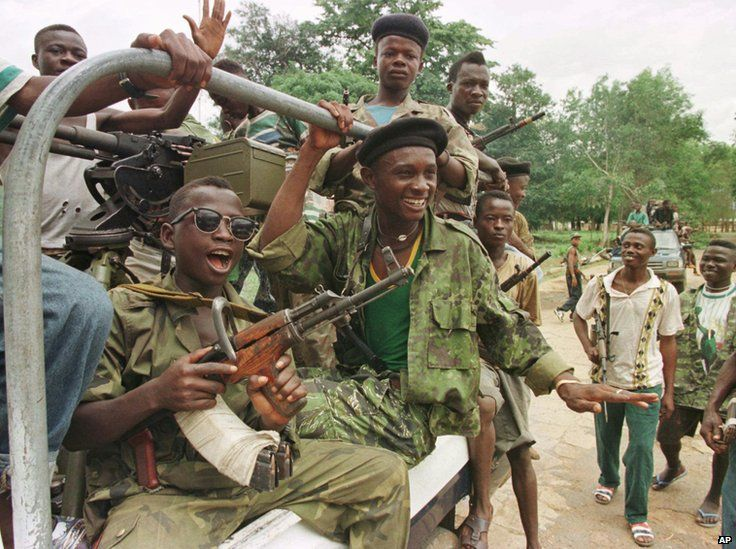 In this entry for Black History 365, I will present the story of Sierra Leone’s Civil War which was the inspiration for the film “Blood Diamond”. Leave a like if you’ve enjoyed what you read and learned something new, and hit the follow button so you can stay up to date with my future posts.

The Sierra Leone Civil War was an armed conflict in the West African nation of Sierra Leone from 1991 to 2002. Let that sink in, the war lasted eleven years. The war began on March 23rd, 1991, when the Revolutionary United Front (RUF) was under the orders of Foday Sankoh, with the support of Liberian rebel leader Charles Taylor and his group, the National Patriotic Front of Liberia (NFPL). Their mission was to overthrow the government of Sierra Leonean President Joseph Momah. Moreover, The Sierra Leone Civil War was one of the bloodiest in Africa resulting in the death of more than fifty thousand people and half a million displaced in a nation of four million. The violent conflict was long because both the RUF and the Sierra government were funded by coveted “blood diamonds” which were minded with slave labor.

During the first year of the war, the RUF seized control of the diamond-rich territory in eastern and southern Sierra Leone. On April 29, 1992, President Joseph Momah was ousted in a military coup led by Captain Valentine Strasser who created the National Provisional Ruling Council (NPRC). As a result, Strasser said the corrupt Momah could revive the economy, provide for the people of Sierra Leone, and stave off rebel invaders.

A year later in March 1993, the Economic Community of West African States Monitoring Group (ECOMOG) sent a group of Nigerian troops to Freetown, the capital city, and assisted the Sierra Leone Army in recapturing the diamond districts and forcing the RUF to the diamond districts and the Sierra Leone-Liberia border. By the end of 1993, many thought the war was nearing its end because the RUF ceased most of its military operations. However, what had begun as a civil war now had international implications as the Sierra Leone government was supported by ECOMOG, Great Britain, Guinea, and the United States, while the RUG was supported by Liberia ( under the control of Charles Taylor), Libya, Burkina Faso.

Fast forward two years later in March 1995, the Sierra Leone government hired Executive Outcomes (EO) a South African-based mercenary group sent to finally defeat the RUF. A year later, Sierra Leone implemented an elected civilian government in March 1996, and the retreating RUF signed the Abidjan Peace Accord which brought an end to the fighting. Furthermore, in May 1997, conflict was still present when a group of Sierra Leone Army officers staged a coup and established the Armed Forces Revolutionary Council (AFRC) as the new government of the country. Feeling that the RUF were lacking strength, they invited them to join and create an alliance where the two factions would rule Freetown with little resistance.

With the new government in effect, Johnny Paul Koroma declared the war to be over. However, looting, rape, and murder mostly by RUF forces quickly followed and it demonstrated the government’s weakness. ECOMOG forces returned and retook Freetown on behalf of the Koroma government, but they could not mollify outlying regions. Subsequently, the RUF continued the civil war.

In January 1999, the country was in disarray and world leaders intervened to promote negotiations between the RUF and the government. The Lome Peace Accord was signed on July 7, 1999. Under those circumstances, the agreement gave Foday Sankoh, the commander of the RUF, the vice presidency and control of Sierra Leone’s diamond mines in return he would have to thwart all fighting and the deployment of a UN peacekeeping force to monitor the disarmament process. RUF compliance with the disarmament process was inconsistent and stagnant, and by May 2000, the rebels were advancing once again towards Freetown. Despite their manpower, help from United Nation forces, British troops, and Guinean air support, the Sierra Leone Army vanquished the RUF before they could take control of Freetown. On January 18, 2002, newly elected President Ahmad Tejan Kabbah declared the Sierra Leone Civil war had finally ended.