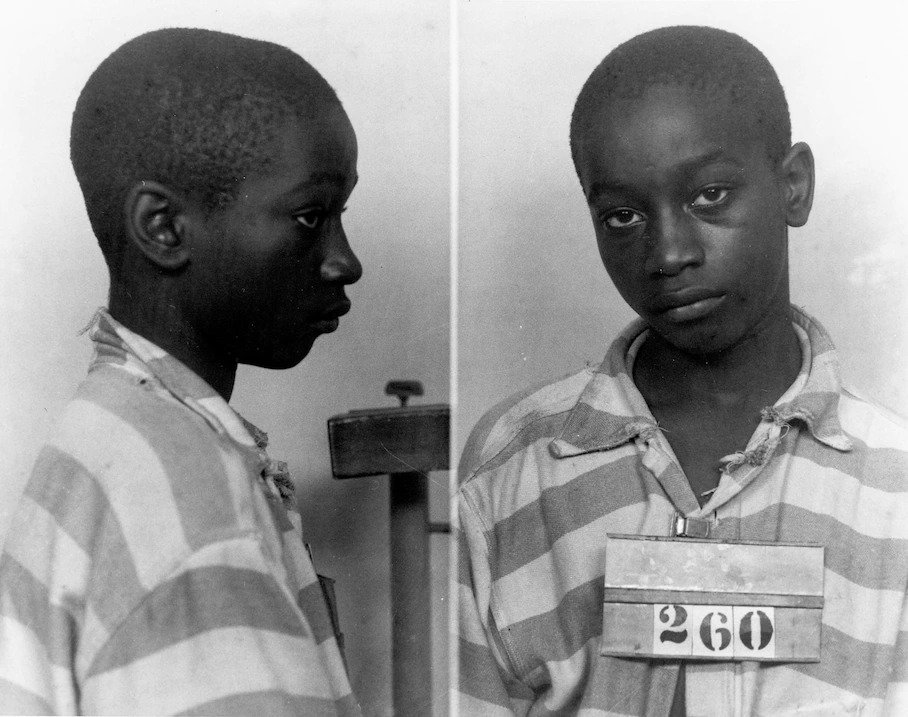 This story for this entry of Black History 365 is disheartening and astounding in terms of the duration of the outcome.  Leave a like and follow so you can stay up to date with my future posts.

The year is 1944 in South Carolina and George Stinney Jr. finds himself interrogated by Alcolu South Carolina police for the murder of two white girls. Within a span of two days, his life was in the balance and the outcome was something all too familiar in the Jim Crow South.

George Stinney Jr. was only 14yrs old when he was executed in South Carolina in 1944. It took 10 minutes to convict him and 70 years to exonerate him. Equally important, he was the youngest person in the U.S. to be executed via the electric chair.

George Stinney Jr. grew up in Alcolu South Carolina where white people and black people were separated by railroad tracks. Stinney’s family lived in a humble company house until they were forced to leave when the boy was accused of killing two white girls. In March 1944, Betty June Binnicker (11), and Mary Emma Thames (7), were riding their bicycles in Alcolu looking for flowers. They came across Stinney and his sister Aime on their journey and stopped to ask for help finding maypops, the yellow edible fruit of passion fruits. That was the last reported time the girls were seen alive. Consequently, hundreds of Alcolu residents, including Stinney’s father, came together to search for the missing girls. It wasn’t until the next day their dead bodies were discovered in a soggy ditch.

Their bodies were examined by Dr. Asbury Cecil Bozard and the conclusions found were that there was no clear sign of a struggle, but both girls had met their demise due to multiple head injuries. Thames had a hole boring straight through her forehead and into her skull along with a two-inch long cut above her right eyebrow. On the other hand, Binnicker had suffered at least seven blows to the head. It was later noted that the back of her skull was “nothing but a mass of crushed bones”. Moreover, the girls were killed by what was described to be a “round instrument”. This is where the story takes a strange turn. The girls were rumored to be not anywhere near Stinney Jr. and his sister, but at a prominent white family’s home on the day of the murder. It must be remembered, that Stinney Jr. like many other black men during the Jim Crow era, were never innocent and always seen as guilty, so tracking down a white killer was an afterthought to the police.

Interrogated without an attorney or his parents, Stinney Jr. was defenseless and vulnerable when in the presence of the intimidating Alcolu police. They claimed that Stinney Jr. confessed to murdering Binnicker and Thames after his plan to have sex with one of the girls failed. The confession was coerced and Stinney Jr. was under duress, but this wouldn’t be addressed until his exoneration in 2014. Furthermore, an officer named H.S. Newman wrote in a handwritten statement that stated, “I arrested a boy by the name of George Stinney. He then made a confession and told me where to find a piece of iron about 15 inches long. He said he put it in a ditch about six feet from the bicycle.” In regard to this, Newman refused to reveal where Stinney was detained. His parents didn’t even know where he was as the trial approached. Even though 14, he was considered at an age where he would face legal ramifications. A month after the girl’s death, the trial began for Stinney Jr. at Clarendon County Courthouse. Stinney’s court-appointed attorney Charles Plowden did “little to nothing” to defend his client. The trial lasted TWO HOURS (you read that right), and during those two hours, Plowden failed to call witnesses to the stand or produce any evidence that would refute and cast doubt on the prosecution’s case. In addition, deliberation was swift, ten minutes to be exact, and it culminated with Stinney Jr. being sentenced to death. One thing that should be noted which is somber is that Stinney hadn’t seen his parent in weeks. They couldn’t reach the courthouse because they were in fear of being attacked by a white mob, and the 14-year-old had to endure being surrounded by an irate group of strangers that totaled up to 1500. On April 24th, 1944, Stinney Jr. was sentenced to die by electrocution.

Stinney Jr.’s execution was not met without resistance by the ways of protests. In South Carolina, organizers that consisted of both white and black ministerial unions petitioned Gov. Olin Johnston to grant Stinney clemency based on his age.

His supporters made valiant attempts in terms of sending hundreds of letters and telegrams to the governor’s office, begging him to show mercy to Stinney. Moreover, they appealed to everything from the idea of fairness to concepts of justice in Christianity, but in the end, their efforts were to no avail. On June 16th, 1944, George Stinney Jr. walked into the execution chamber at the South Carolina State Penitentiary in Columbia with a Bible tucked under his arm. There’s one issue that arose before the execution commenced. Stinney weighed only 95 pounds. After being dressed in a loose-fitting striped jumpsuit he was strapped into an adult-size electric chair, but his small stature made it a struggle for the state electrician to adjust the electrode onto his right leg. Eventually, it was done, and a mask that was too big for him was placed over his face. Under these circumstances, it’s customary for a death row inmate to be given the courtesy for any final words. “No sir” was Stinney’s reply to an assistant captain when asked if he had any last words. Once the officials turned on the switch, 2,400 volts surged through Stinney’s body causing his mask to slip off. His eyes were wide and teary, and saliva was emanating from his for the witnesses in the room to see. After two more jolts of electricity were administered, it was over. Stinney was pronounced dead shortly thereafter. Within a span of 83 days, Stinney had been charged with murder, tried, convicted, and executed by the state.

In 2014, George Stinney’s murder conviction was thrown out. His siblings specifically his sister Katherine Robinson testified and claimed that his confession was coerced and he had an alibi: At the time of the murders, Stinney was with his sister Aime watching the family’s cow.

It was noted during the testimonies that a man named Wilford “Johnny” Hunter who was Stinney’s cellmate claimed that Stinney denied ever murdering Binnicker and Thames. He said quote, “He said, ‘Johnny, I didn’t, didn’t do it,’” Hunter said. “He said, ‘Why would they kill me for something I didn’t do?’”. The meticulous proceedings took a few months of consideration on December 17th, 2014, Judge Carmen T. Mullen vacated Stinney’s murder conviction, stating that the death sentence was a “great and fundamental injustice”. Stinney’s siblings were elated to learn that their brother was exonerated after 70 years and also glad that they contributed to bringing justice to their brother’s memory. Lastly, Stinney’s sister Katherine Robinson said quote “It was like a cloud just moved away,” said Stinney’s sister, Katherine Robinson. “When we got the news, we were sitting with friends… I threw my hands up and said, ‘Thank you, Jesus!’ Someone had to be listening. It’s what we wanted for all these years.”