It’s been a while since I did a Black History 365  post on the history of African civilizations but look no further because this post is all about one specifically the Kushite Kingdom in northern Sudan and lower Egypt. Leave a like if you’ve enjoyed what you read and hit that follow button so you can stay up to date with my future posts. As always, peace and keep it real.

Historical documents collected by archaeological discoveries indicate that the ancient city of Meroe served as the capital of the Kingdom of Kush, which is located in present-day Sudan. The Kingdom of Kush was a northern African Kingdom that had a profound influence that spanned from approximately 1069 BCE to 350 CE. Even though the region around Kush, later known as Nubia had been inhabited since 8,000 BCE, the kingdom of Kush didn’t become established and gain prominence until years later. Additional findings indicate that Egyptians and the Kushites were in contact as early as 3150 BCE and 2613 BCE during Egypt’s Early Dynasty Period, the Kushite civilization most likely evolved from the early cultural contact and was heavily influenced by the Egyptians.

The Kingdom of Kush was robust with rich resources such as gold which was the Egyptians’ main source of this precious commodity, and it is widely assumed that the later name was derived from the Egyptian word for gold “Nub”. Due to the Kushite kingdom’s exorbitant wealth, it quickly ruled over Egypt and dominated its politics, with its kings ruling over Egypt. Egypt’s weakness benefited Kush, and Kushite kings took advantage of it and reigned without regard for Egyptian monarchs or policies around 1069 BCE. Furthermore, as the kingdom expanded steadily, it reached a point where it could strongarm Egypt and take whatever it wanted without deferring to Egyptian kings. As a result, the kingdom rose to power in Egypt over time, not to conquer, but to preserve Egyptian culture and heritage.

The previous ruler of Meroe, The Great City was succeeded by a puppet king named Necho 1 after the 25th Dynasty ended with Tantamani. The 25th Dynasty was a line of Pharaohs who originated in the Kingdom of Kush. All the kings of these dynasties called the city Napata their spiritual homeland. Moreover, Necho’s son Psammetichus 1, aka Psamtik 1, (c. 665-610 BCE) ended Assyrian rule and paved the way for the establishment of Egypt’s 26th Dynasty. Under those circumstances, Psammetichus and his successor, Necho 11 ruled successfully. Nonetheless, Psammeticus 11, Necho 11’s successor led an expedition against the Kingdom of Kush, destroying towns, temples, monuments, steel, and finally the sacred capital city Napata before calling it quits and returning to Egypt because of boredom. After the desecration of Napata, the capital city of the Kushite Kingdom was moved for safety reasons. It was relocated further south to the town of Meroe around 590 BCE. Meroe’s rulers continued to imitate Egyptian customs, fashion policies, and religious rituals until the reign of King Arkamani.

Arkamani 1 had some basic education in Greek philosophy and resisted being controlled by priestly superstitions according to historian Dlodorus Sirculus (1st century BCE). Consequently, he led a band of men to the temple, slaughtered all the priests, and ended their reign over the monarchy. In addition, while in the temple, he implemented a new policy and practice that included removing Egyptian cultural practices in favor of Kushite practices. Furthermore, it didn’t stop there, Arkamani would go on to replace Egyptian hieroglyphic script with Meroitic, which has yet to be deciphered. He also changed the fashion style from Egyptian to Meroitic and Egyptian gods such as Aperdemak were assimilated into the Kushite ones. Alterations were done to burial customs, with royalty now buried in Meroe rather than Napata.

Meroe, on the Nile’s banks, thus became the capital of the Kingdom of Kush. Its ironwork and trade brought a vast amount of wealth as an agricultural and industrial center. Agricultural products such as grains and cereals were exported in addition to iron weapons and tools, and with that, the city was overrun with livestock.Meore legendary status brought forth rivalries. Adversaries were on the horizon to take on the Kushite Kingdom. King Cambyses 11 of Persia (525 – 522 BCE) is said to have launched an unsuccessful expedition to plunder. Cambyses 11’s army suffered defeat by the treacherous and inhospitable terrain they crossed, as well as the weather. However, The Axumites forged a successful attack against Moroe around 330 CE. Even though the city survived for another 20 years, it was effectively destroyed due to the massive manpower of The Axumites. The Axumites would send the fatal blow to the Kingdom but Meroe was doomed even before the invasion and was on the verge of imploding. For one thing, the iron industry required a large amount of wood to produce charcoal and fuel the furnaces used in iron smelting. Due to this high demand, a large portion of the city was deforested. Moreover, due to the city’s large livestock population, the fields around the city were heavily overgrazed and overused for crop production resulting in a depletion of the soil. The once prosperous and wealthy Kingdom of Kush had effectively ended by the time the last of the people left the city around 350 CE. 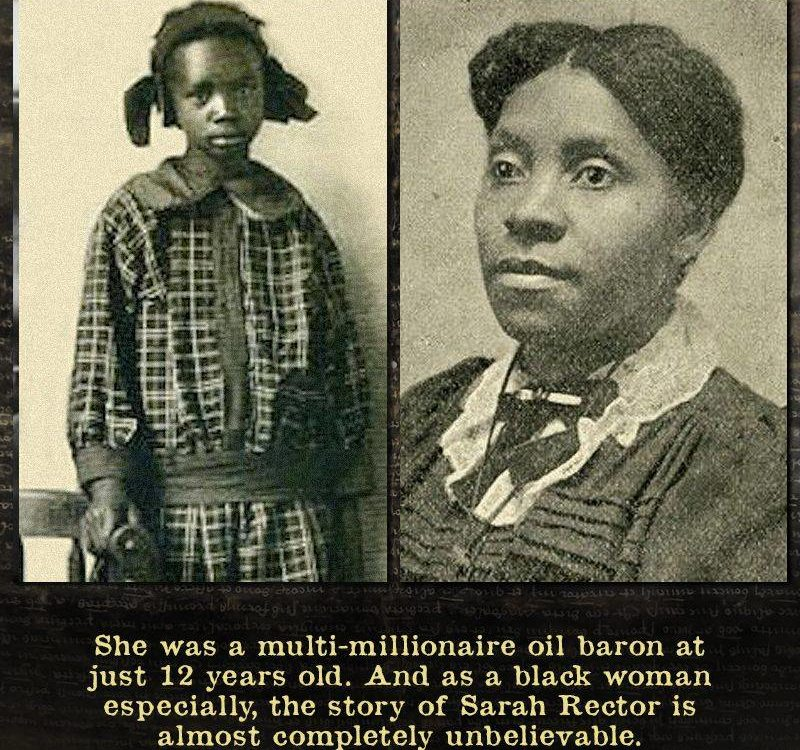 After the civil war, reconstruction, and what would subsequently become Jim Crow laws, slaves in the south were freed and lived as free Americans but still experienced disenfranchisement and some had difficulty prospering financially. However, I’ll be presenting in this episode the story of a young black girl named Sarah Rector from Taft Oklahoma who came upon a fortune that changed her life forever, but she had obstacles standing in her way.

Sarah Rector was born in 1902 in Taft Oklahoma and came from humble beginnings but she later became the wealthiest black girl in the country at the age of 11. Her family was African American members of the Muscogee Creek Nation in Indian Territory. Rector’s grandparents had been enslaved by Creek Tribe members, but once the Civil War ended, they were entitled to land allotments under the Dawes Allotment Act of 1887. Furthermore, when Indian territory integrated with Oklahoma territory to form the state of Oklahoma in 1907, hundreds of Black children who were referred to back then as “Creek Freedmen minors,” were granted 160 acres of land.

Rector’s allotment was located in the middle of the Glenn Pool oil field and was initially valued at $550. A few years later in 1911, her father decided to lease his daughter’s piece of land to a major oil company to help pay for the property taxes. And in 1913, everything would change.

According to Searching for Sarah Rector: The Richest Black Girl in America by Tonya Bolden, an independent driller struct oil that started to bring in 2,500 barrels or 105,000 gallons per day. As a result, Rector, still being an owner of the land, began earning more than $300 a day (which is equivalent to about 7,500 a day in our time).

It was inevitable with all the fortune she received that she would attract attention. Rector began getting national attention from newspapers all over the country. For instance, The Kansas City Star published the headline, “Million to a Negro Girl – Sarah Rector, 11-year-Old, Has Income of $300 A Day from Oil”. Additionally, another newspaper, The Savannah Tribune, published the headline, “Oil Well Produces Net Income – Negro Girl’s $112,000. You have to understand a black person making that much, especially at that young, would cause eyebrows to raise and white America wasted no time in relinquishing her fortune.

As mentioned, sadly Rector’s fortune would be interfered with by the law. There was a law at the time that required Native Americans and African Americans who were citizens of Indian Territory to be assigned a “well-respected” white guardian. As a result, Rector’s guardianship was turned over to a white man named T.J. Porter.

However, reportedly W.E.B Du Bois and the NAACP got involved to protect her well-being and fortunately were able to be successful with it. Rector, later on, to own one of the first Black-owned auto dealerships in the country, and reportedly enjoyed her wealth until she died!