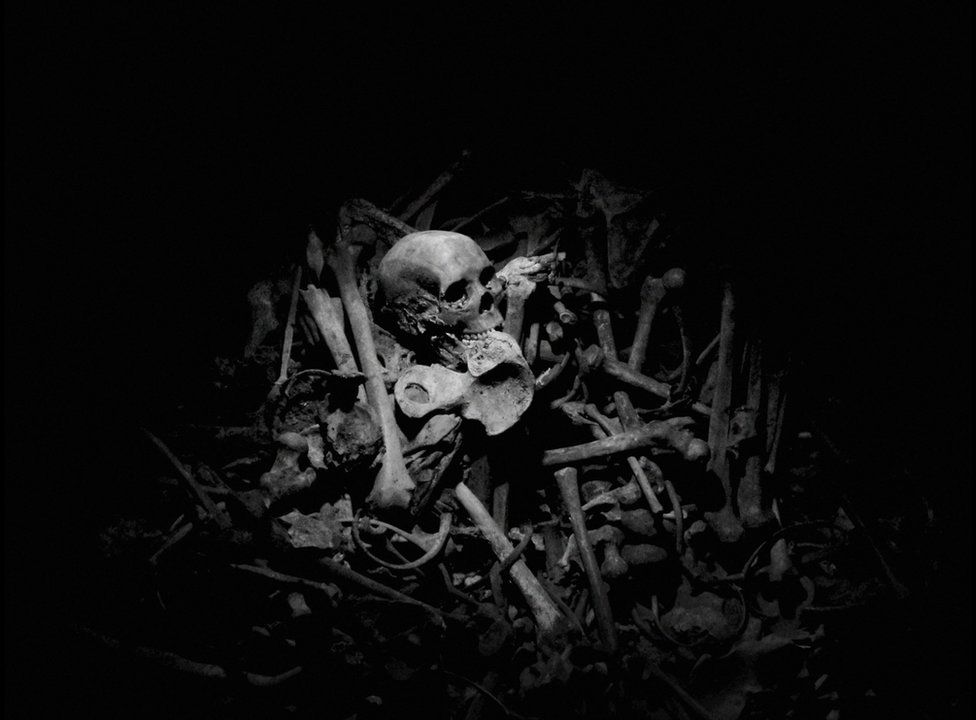 Welcome readers to another entry in Black History 365, a series where I explain, educate and explore historical events, unsung black figures in world history, and recount the struggles and triumphs of black people worldwide. In this entry, I will present the horrific events that happened during the Rwanda Genocide in the early 1990’s and the struggles and adversity the country had to endure to recover from the onslaught of deaths between two rival ethnic groups.

How did the genocide start?

Around 85% of Rwandans are Hutu’s but the Tutsi minority dominated the country. In 1959, the Hutus overthrew the Tutsi monarchy and tens of thousands of Tutsis fled to neighboring countries including Uganda.

Afterward, a group of Tutsis exiles formed a rebel group called the “Rwandan Patriotic Front (RPF), which invaded Rwanda in 1990 and fighting continued until a 1993 peace deal was agreed upon. However, that peace deal was short-lived because on the night of April 6th, 1994 a plane carrying then-president Juvenal Habyarimana and his counterpart Cyprien Ntaryamira of Burundi – both Hutu’s extremists blamed the RPF and immediately started a well – organized campaign of slaughter. The RPF said the plane had been shot down by Hutu’s to provide an excuse for the genocide.

How was the genocide carried out?

With a meticulous and strategic organization, lists of government opponents were handed out to militias who went and killed them along with all of their families. Neighbors killed neighbors and some husbands killed their Tutsi wives, saying they would be killed if they refused to submit to their orders.

At the time, ID cards had people’s ethnic groups on them so militias set up roadblocks where Tutsis were slaughtered on sight with machetes, which most Rwandans kept around the house. Thousands of Tutsis women were taken away and kept as sex slaves. 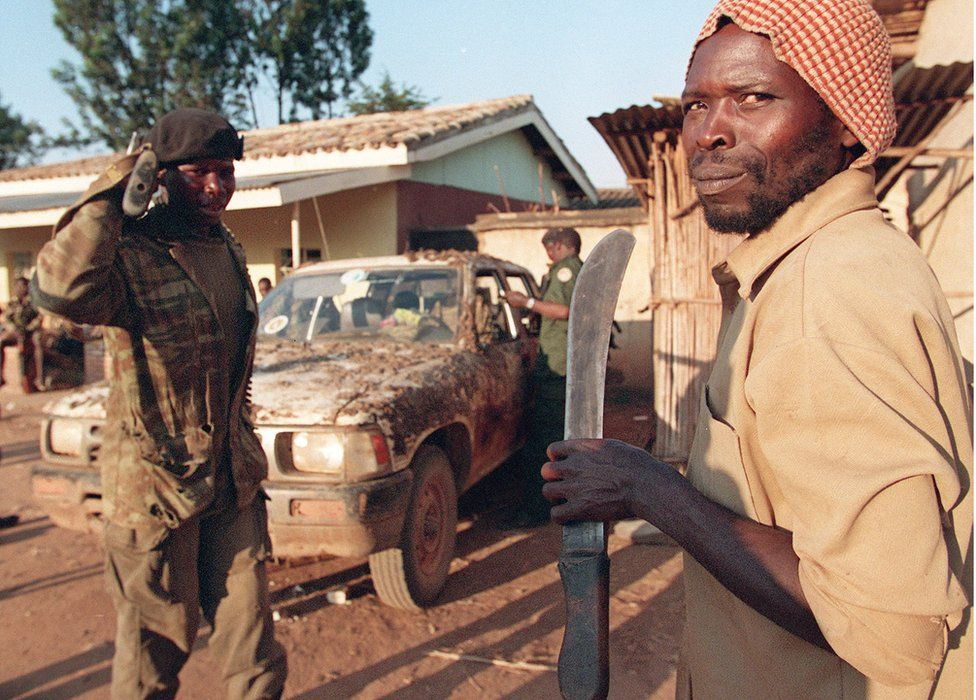 Why was it so vicious?

For one Rwanda has always been a tightly controlled society with strongly organized districts up to the top of government. MRND the then-governing party had a youth wing called the Interahamwe, which was turned into a militia to carry out an onslaught of slaughtering.

Weapons and hit – lists were handed out to local groups, who knew exactly where to find their targets. The Hutu extremists set up a radio (RTLM) and newspaper which circulated with propaganda filled with hostility, urging people to “weed out the cockroaches” meaning to kill the Tutsis. To make the targets easier to capture and eliminate, names of prominent people to be killed were read on the radio. Furthermore, even though surprising, priests and nuns were convicted of killing people, people including some who sought shelter in churches. 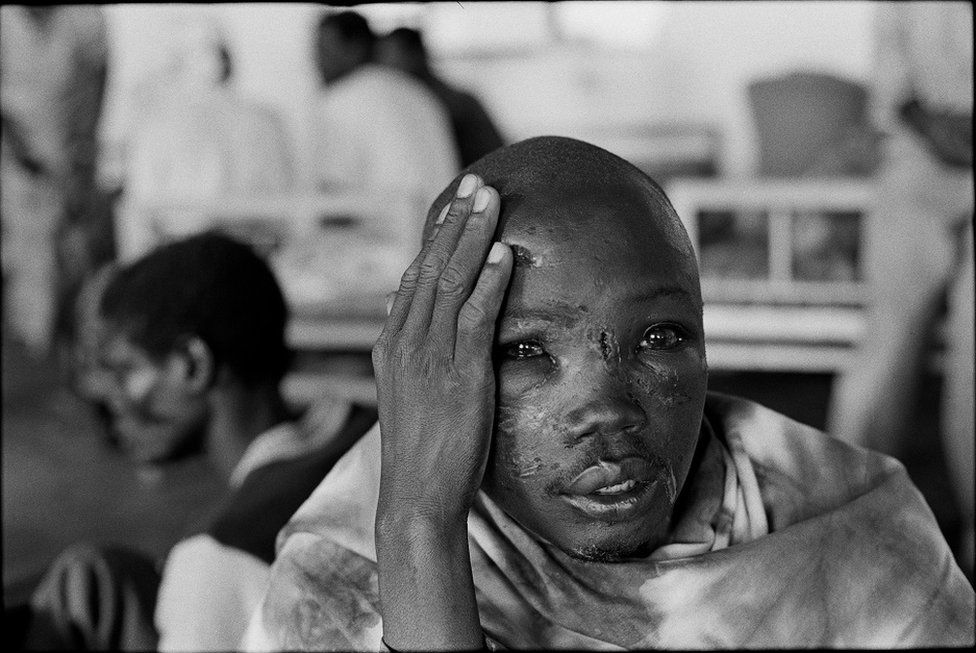 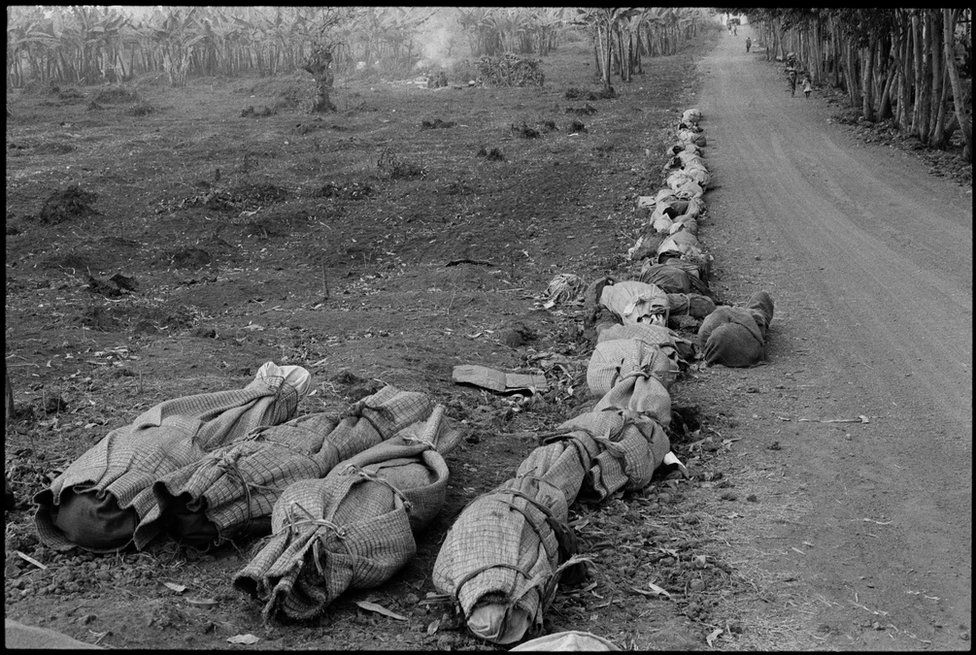 Did anyone try to stop it?

The U.N. and Belgium had forces in Rwanda but the U.N. mission was not given the mandate to stop the killing. Moreover, a year after U.S. troops were killed in Somalia, the U.S. was determined not to get involved in another African conflict. The Belgians and most UN peacekeepers pulled out after 10 Belgian soldiers were killed. France who were allies of the Hutu government and would supply them weapons, sent a special force to evacuate their citizens and later set up a supposedly safe zone but were accused of not doing enough to stop the slayings in that area. Paul Kagame, Rwanda’s current president has accused France of backing those who carried out the massacres, a charge denied by Paris. 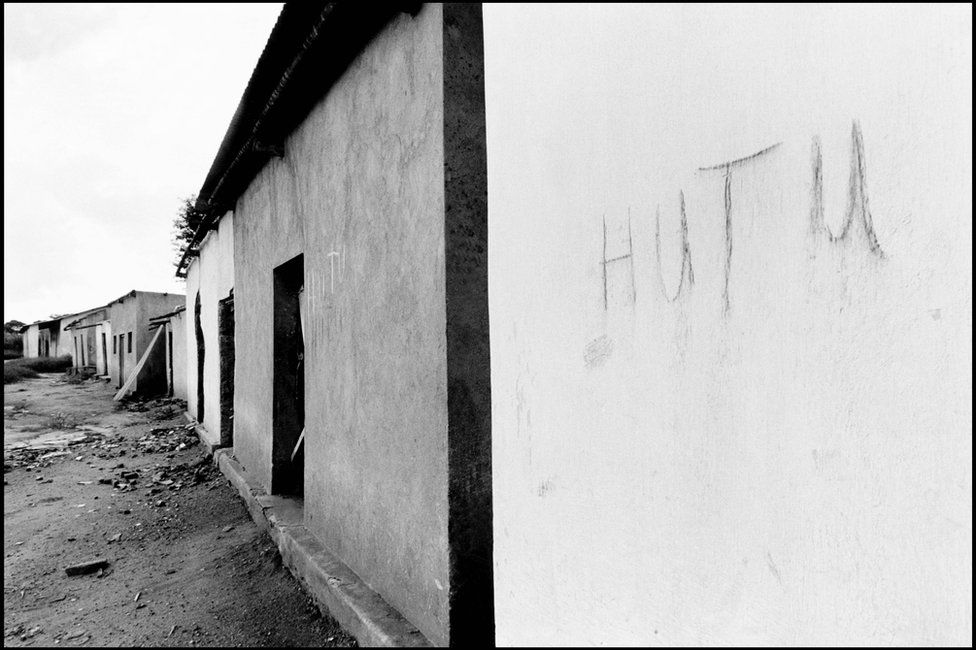 How did it end?

The well-organized RPF, backed by Uganda’s army gradually seized more territory, until July 4th, 1994, when forces marched into the capital of Rwanda, Kigali. Some two million Hutu’s – both civilians and some of those involved in the genocide fled across the border into the Democratic Republic of Congo at the time called Zaire, fearing revenge attacks. Others went to neighbouring Tanzania and Burundi. 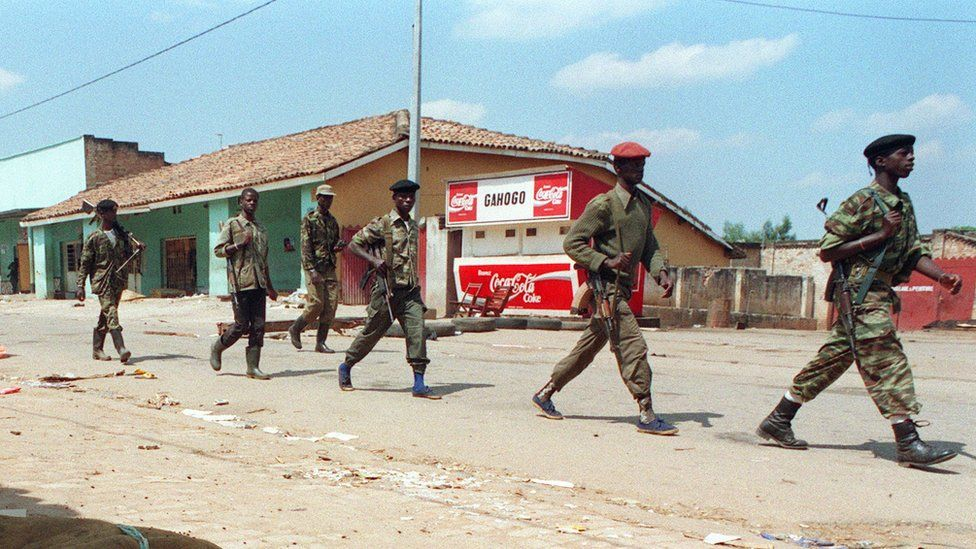 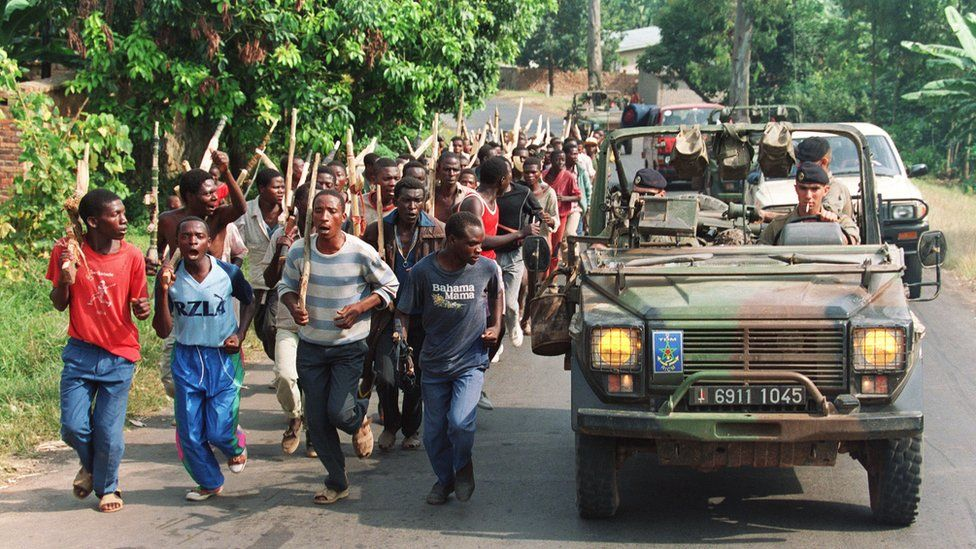 Human rights groups say RPF fighters killed thousands of Hutu civilians as they took power and more after they went into DR Congo to pursue the Interahamwe. The RPF denies this. Meanwhile, in the DR Congo, thousands died from Cholera, while aid groups were accused of letting much of their assistance fall into the hands of the Hutu militias.

What happened in DR Congo?

The RPF, now in power in Rwanda embraced militia fighting both the Hutu militias and the Congolese army, which was aligned with the Hutu’s. On the other hand, the Rwandan – backed rebel groups eventually marched on DR Congo’s capital, Kinshasa and overthrew the government of Mobutu Sese Seko, installing Laurent Kabila as president. However, the new president’s reluctance to tackle Hutu militias led to a new war that dragged in six countries and led to the creation of numerous armed groups fighting for control of this mineral-rich country.

An estimated five million people died as a result of the conflict which lasted until 2003, with some armed groups remaining active until now in the new Rwanda’s border. 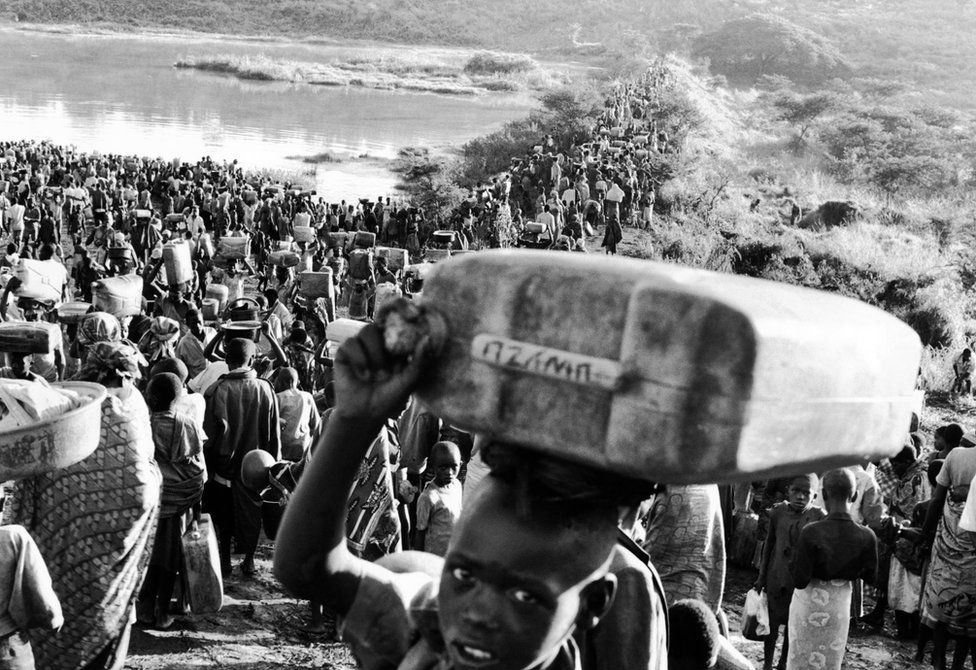 Has anyone faced justice?

The International Criminal Court was set up in 2002, long after the Rwandan genocide so those responsbile could not be put to trial. Instead, the UN Security Council established the International Criminal Tribunal for Rwanda in the Tanzanian town of Arusha to prosecute the ringleaders. A total of 93 people were indicted and after lengthy and expensive trials, dozen of senior officials in the former regime were convicted of genocide – all of them were Hutu’s.

Within Rwanda, community courts, know as Gacca were created to speed up the prosecution of hundreds of thousands of genocide suspects awaiting trial.

President Kagame has been hailed for transforming the tiny, devastated country he took over through policies that encouraged rapid economic growth. He has also tried to turn Rwanda into a technological hub and is very active on Twitter.

But his critics say he does not tolerate dissent and several opponents have met unexplained deaths, both in the country and abroad.

The genocide is still a hugely sensitive issue in Rwanda, and it is illegal to talk about ethnicity.

The government says this is to prevent hate speech and more bloodshed but some say it prevents true reconciliation.

Charges of stirring up ethnic hatred have been leveled against some of Mr. Kagame’s critics, which they say is a way of sidelining them.