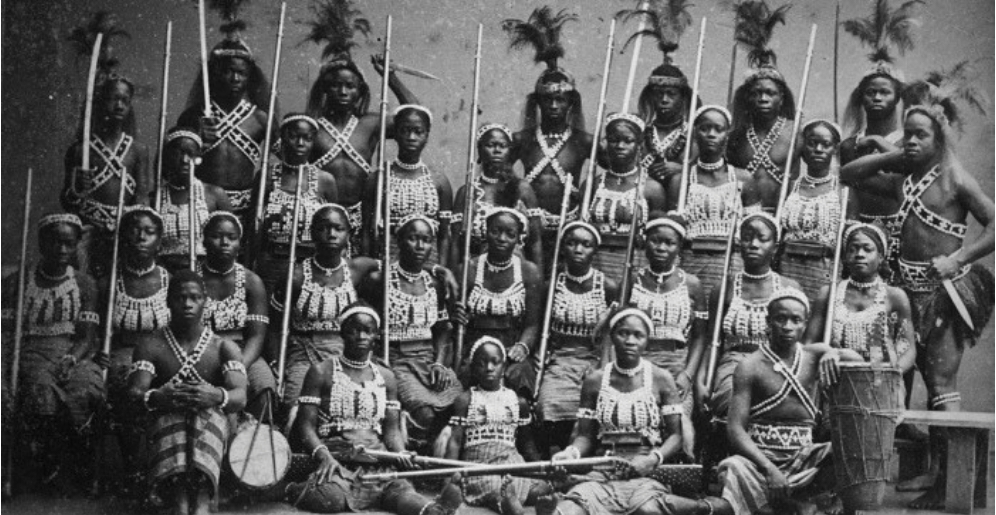 Welcome readers, to another entry in Black History 365, a series where I explain, educate and explore historical events, unsung black figures in world history, and recount the struggles and triumphs of black people worldwide. In this entry, I will present the story behind the Dahomey Warriors from West Africa. With the recent passing of the extraordinary actor Chadwick Boseman, I felt it would be fitting to present the real life African women warriors that inspired the Black Panther film. I for one didn’t know about them, but after taking a look at the photos of the Dahomey Warriors and the fictional Dora Milaje in Black Panther, it’s hard to not notice the similarities  and the inspiration for the blueprint on how to depict the Dora Milaje army in the Marvel Universe.

On the coast of West Africa, the Dahomey Kingdom was in what is now modern day Benin was once home to one of the most fierce and elite female warrior troops in world history. Furthermore, there are various myths surrounding the creation of this army commonly known as the Dahomey Amazons. Oral legends state that the Dahomey Warriors were descendants of Queen Hangbe who was the sister of the King of Dahomey, Akaba. Queen Hangbe was a warrior who led men and women in battle and it is believed during her reign (estimates range from 3 to 6 years) she gradually established an all – female troop called the Dahomey Warriors.

The Dahomey Warriors were said to be formed in order to protect their Kingdom. The Kingdom Dahomey was outnumbered by their enemies and the rise of the European Slave trade forced the Kings of Dahomey to conscript women into the military with their main objective to protect the King and their Kingdom.

At the end of the 19th century, the Dahomey kingdom found themselves battling the French. Unfortunately, they would lose their battle to the French, and nowadays there is very little evidence of the survivors. Many sources claim that the last of the Dahomey Warriors, a woman named Nawi, was discovered living in a remote village but she died at the age of 100 in 1979. On the other hand, other sources suggest that the last of the Dahomey Warriors died in the 1940s.

All in all, the Dahomey warriors have gone down in history as strategic leaders, fearless warriors, ruthless soldiers, and revered protectors. A French soldier once praised them as “warrioresses… who fight with extreme valor, always ahead of the other troops.” He continued, “They are outstandingly brave… well trained for combat and very disciplined.”

Leave a like and comment if you found this interesting and would like to chime in. Also, give my page a follow so you can stay up to date with my future posts. Lastly, if any of you use Spotify or Overcast, check out my podcast series Black History 365 : The Throw Down which is the audio version of this blog series. You can simply type in the podcast name and it will be the first one to show. As always, peace and keep it real.