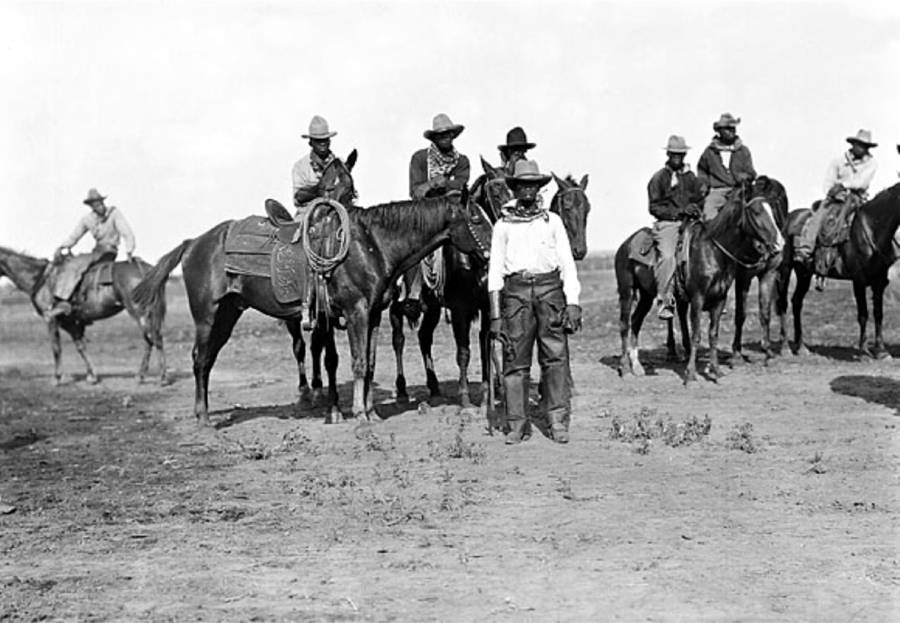 Welcome readers to another entry in Black History 365, a series where I explain, educate and explore historical events, unsung black figures in world history, and recount the struggles and triumphs of black people worldwide. In this entry, I will present the story behind black cowboys in the Wild West and three prominent ones in particular. The three men I will discuss in this post are three of many other black cowboys who left their legacy and contributions to the Wild West and America, but America media seems to always gloss over their existence.

Many of the depictions of cowboys we’ve seen have been of white men and that’s due to Hollywood’s whitewashing of the wild west, but some of the first settlers were freed slaves who traveled west and became black cowboys and legends of the American frontier.

After the Civil war and Reconstruction, America turned its attention to the newly settled lands in the Great Plains and the West. Despite the traditional depictions of cowboys in Hollywood such as John Wayne for example, the American West was settled by a large portion of freed slaves who made the territory their home and they made the most of it with the contributions that they brought. In the 1870s and 1880s, as many as 25 percent of the 35,000 cowboys in the old west were black cowboys.

Freed slaves journeyed West to find their fortunes that were among cattle ranches and rows of crops. Before being freed, slaves were in charge of crops and took care of cows for their white owners and the vast availability the land had to offer gave them a new opportunity for many to escape the south.

To get a better understanding, below are some prominent black cowboys who were famous for their skills riding horses, managing herds, and enforcing the laws.

In 1875, Bass Reeves became a U.S. Marshall who oversaw Oklahoma Territory before it was annexed as a state. Being a black man after Reconstruction was adverse on the daily, and to make things even more of a challenge Reeves job as U.S. Marshall came with constant conflicts. For instance, of the 200 Marshalls killed in the line of duty, 130 met their demise in Oklahoma. However, that didn’t deter the former slave from Arkansas. He was prepared conflicts if need be due to being an expert marksman with the rifle and pistol. That kind of weaponry training can be attributed to his time in Oklahoma Territory during the Civil War.

Reeves served as a U.S. Marshall for 27 years and is widely regarded as the first true lawman of the Wild West. With the help of his Native American assistant, he tracked down as many as 30,000 criminals during his career. He achieved this through skill, but also with his unwavering persistence. Reeves used disguises when undercover to get close to criminals before capturing them.

Born in Texas in 1870, Bill Pickett was a master ranch hand who invented the art of bulldogging a method that subdued cattle by biting their lip. Pickett would observe bulldogs wrangle the cattle to the ground by biting their lips until the cow sat still. Pickett turned bulldogging into a way of wrestling cattle that humans could utilize. For example, he would ride up next to a cow or bull, and then lasso the animal and pull it to the ground. Pickett would then jump off his horse and next to the cow before biting the lip and tying the cow’s legs.

Bulldogging became a very popular and consistent main attraction for rodeos in the late 1880s and early 1900s. The technique eventually became outlawed due to animal cruelty concerns. In 1972, 40 years after his death Pickett became the first inductee into the National Rodeo Hall of fame. Below is a video depicting the art of bulldogging in action.

Bob Lemmons grew up a slave before moving to West Texas. West Texas territory contained herds of wild mustangs, which were valuable commodities to ranchers settling in the Wild West. Lemmons had a unique approach that started with the trust of the herd. He would do this by working alone rather than in a group because having a large group of men would spook the herd.

Lemmons infiltrated the herd of wild mustangs and then broke the lead the horse or in other words he would capture and use it as not only his ride but his leader of command for the rest of the horses, who would follow that leader horse he first captured back to his ranch. Furthermore, his lucrative work allowed him to earn enough money to buy a ranch and build up the large herds of horses and cattle. He died in 1947 at the age of 99.

Leave a like and comment if you would like to chime in, and give my page a follow so you stay up to date with my future posts. As always peace and keep it real.