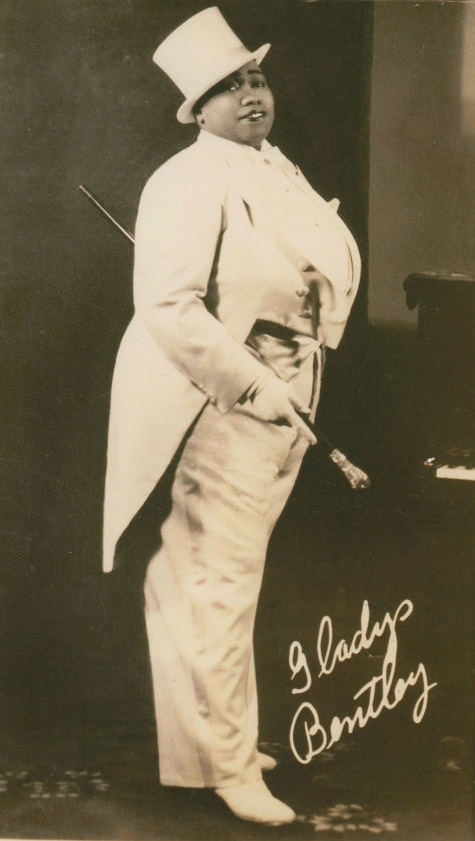 The Harlem Renaissance was a period in American History that was filled with exuberance and creativity. The people who created brilliant forms of art during that time did it with integrity and were very steadfast in bringing African American art to parts of America that were unfamiliar with it. However, even with all the praise artists received during that time for their captivating work, some artists had to experience an audience that was unreceptive to them and face condemnation for staying true to themselves. With that said, in this entry of Black History 365, I will present the story of Gladys Bentley, an unconventional artist that brought extraordinary talent and flamboyance that America during that time wasn’t accustomed to.

Gladys Bentley unabashedly displayed her queer desires during the Harlem Renaissance. Even though a great entertainer, Bentley was constantly reviled due to her explicit songs, appearance, and queer lifestyle. She wore masculine attire over her full-figured physique, specifically a white tuxedo, tophat, and accessorized with a cane. Moreover, this kind of image was jarring to most, but once she began singing her appearance took a backseat. Regarding this, her musical prowess was respected and she made her mark as a formidable force in American music.

Born in Philadelphia on August 12th, 1907, Bentley was the daughter of a Black American father and a mother from Trinidad and Tobago. When Bentley was young she knew she was not an ordinary child, saying that “it seems I was born different”. Her parents had a feeling something was awry when she began consistently wearing boy’s clothing. As a result, her parents went as far as to go to doctors in hopes of trying to “cure” her unorthodox interests. Nevertheless, Bentley felt comfortable and confident wearing men’s attire and would wear it from that day on.

At the beginning of the Harlem Renaissance, Bentley found her first break in entertainment on the Harlem Party circuit and then the nightclubs, such as the UBANGI Club. During that time “the pansy craze” was prominent and drag queens were referred to as “pansy performers”. They were popular entertainment throughout major U.S. cities such as Los Angeles., New York City, Chicago, and San Francisco. The UBANGI Club appealed to queer audiences and it became a place where Bentley felt welcomed and thrived. Furthermore, as her popularity increased she began getting billed as a male impersonator, and with this kind of marketing, it was hard for an audience to ignore an impending spectacle. Bentley was against cultural norms and she challenged concepts of what women were like during that era. In addition, she did it as a black woman in America, and that should be noted because it was commonplace for black women to be depicted as jezebels and lascivious after the reconstruction era. During her performances, she kissed women on stage, and overtly expressed her queer sexuality on stage with sexually explicit songs. In regards to this, homosexuality and other “deviant” sexual orientations were seen as peculiar and this attitude lead to a moral panic known as “Lavender Scare”. Gay men and lesbians were said to be a national security risk and communist sympathizers. This paranoia resulted in the marginalization of gay performers and one way the U.S. protected itself from threats was to remove them from employment. Additionally, gay people were seen as susceptible to being manipulated by foreign threats and the U.S didn’t want that kind of exposure. When it came to Bentley, she was reproached for her constant ostentatious behavior which she used to compliment her singing and was then subsequently barred from performing at other New York City nightclubs due to her conduct. Nebulous phrasing such as “Disorderly Places” was used as a disclaimer for patrons entering nightclubs performed by gays.

Even though Gladys Bentley was an eccentric performer that had success performing at nightclubs nationwide for two decades, she had to endure a lot of public pressure and it resulted in her changing her performance and image to placate their discontent. Equally important, Bentley went back into the closet and lived her life so it seemed as a heterosexual woman, marrying a man and cleaning up the content of her music. Nevertheless, she still found success even with her rebranding but not to the level of her days working the New York City nightclubs.

Bentley brought to the Harlem Renaissance a flare and was emboldened to display it at any cost up until the later parts of her career. Her impact was palpable every time she went on stage, and she even was the inspiration for several characters in novels such as “Deep River, “Strange Brother”, and “Parties”. Some might say she’s an unsung figure from the Harlem Renaissance and that’s why her story should be told.