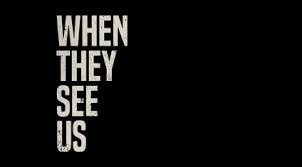 The truth that is buried by lies will eventually find the strength to rise to the surface. It may take time, but time is all the truth needs to break free with its revelation. – TheRhymeRula

Man, I can think of endless adjectives to describe the powerful and poignant Netflix miniseries “When they see us” by Oscar nominated director Ava Duvernay. The miniseries takes the viewer on the journey of five young boys ( four black , one Latino) who were dubbed the Central Park 5 in April 1989. If you’re unfamiliar with this highly publicized case, I’ll jump right into the story. On that date of April 19, 1989 all the boys were hanging out at the Central Park in Manhattan NYC, having a good time, causing a little ruckus (as youngsters sometimes do) but they were unfortunately at the wrong place at the wrong time. Police began canvassing and were looking to arrest suspects in the rape and attempted murder of a white female jogger by the name Trisha Melli. Four of the five boys; Yusef Salaam, Raymond Santana, Kevin Richardson, and Antron McCray were on a police list of suspects. However, the fifth boy Korey Wise was not and when Yusef Salaam was approached by the police to go to the police precinct, Korey agreed to accompany his friend. Loyalty is something we all look for in relationships and do our best to maintain. However, it can be a gift and a curse, and in this case it went towards the later and Korey found himself in a frightening situation.

After that they’re lives would be changed forever. These kids endured physical and verbal abuse by detectives, coercion, and fabricated stories that detectives tried to piece together. Mind you Yusef Salaam and Korey Wise were the only two who knew each other, so the other three were adding names the police were feeding them and creating stories to build a case against each other. With that said, there was no legal representation or parental interference except for Yusef Salaam whose mother came in time to get her son the hell up out of there. They was no physical evidence, nothing that could of linked them to the crime, the only way these boys were sent to the prison was was their forced confessions and how they didn’t have the right complexion for protection. Fast forward, all of them except Korey Wise did around seven years in juvenile prison, while Korey since he was sixteen was tried as an adult and was sent to state prison doing a total of thirteen years. Taking it even further, in 2002 all were exonerated when serial rapist Matias Reyes admitted to not only the crime but others that were unsolved. He had the same motives in all his killings and rapes, the DNA evidence was a match to the jogger, and the the vivid description on how it occurred sealed the case shut. In 2014 the city of New York awarded a 41 million dollar settlement after the five accused sued the city and they divided their reparations. Some of them had to divide up with attorneys and so forth.

Before watching this miniseries I’ve heard about the Central Park 5 vaguely maybe through pop culture references but not in any detailed descriptions. It’s a saddening, disturbing, redemptive, like I said before there are too many adjectives to describe this haunting story. I cannot imagine as a freshman or sophomore in high school pretty much being kidnapped by the police for days and forced to confess to something I have no idea about, and then spend years on end in a place like prison where I had no business to ever be in. The story had holes all in it from the beginning. With the documentary, miniseries, and the prosperous lives the now men live, I’d say they’ve done their best job to now cover the holes.

3 thoughts on “They see you now”